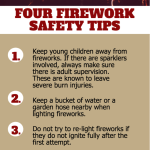 At Schlapprizzi Attorneys at Law, Independence Day is one of our family’s favorite holidays. There is nothing like spending the day with family members and celebrating this great country of ours.

As some families are barbecuing and partaking in the festivities, others end up in the emergency room due to firework-related burn injuries. According to the National Fire Protection Association, far more fires are reported on Independence Day than any other day of the year; and two out of five of those fires are caused by fireworks.

As St. Louis, Missouri, burn injury lawyers, we want to make sure that you and your family have a happy and safe 4th of July holiday. We know how spectacular fireworks and firecrackers are—there’s something so miraculous about the sight—but it is crucial that you take safety precautions.

END_OF_DOCUMENT_TOKEN_TO_BE_REPLACED

Products liability – personal injury litigation remains an active aspect of our judicial system.  Virtually universally the defense seeks to escape responsibility by alleging that the injured party’s injury was due to an abnormal use of their product.  While an abnormal use might occur (not the precise anticipated use), this does not allow the seller to escape liability when the injury occurs from a “foreseeable misuse” of the product.  This means that if the seller reasonably anticipated that because of the nature of the product, it was to be anticipated that the product would be misused in certain ways, the seller can be liable if the injury occurred from what was anticipated by the seller to be a potential misuse.  It is important to keep in mind that a misuse that is foreseeable can also be utilized as a strict liability theory of recovery.

Here we go again— but wait, it is even worse!  Since our Missouri Supreme Court eliminated caps in injury malpractice cases, the insurance industry and its powerful allies in the Missouri legislature are presenting a bill to pass into law, a bill to eliminate entirely medical malpractice claims from the common law, but to instead, create a new legislative cause of action so that the legislature can then, on behalf of the medical profession, mandate whatever limitations on an injured person’s claim that they deem appropriate.  This proposed legislation is in direct conflict and a deviation from our historical system of jurisprudence, wherein this category of case always has been a part of the common law of our legal system, and the legislature has never been constitutionally permitted to interfere, because it is a basic violation of the separation of powers.  Even if there were judicial and constitutional precedent for this type of legislative action, it would be further unconstitutional for being “special legislation”, a denial of equal protection, a denial of our constitution’s “open courts” provision and most importantly a denial of the inviolate constitutional right to a trial by jury.
Whatever one’s stance might be with regard to the pursuit of legitimate medical negligence malpractice cases, such a law would be a profound deviation and exception to constitutional authority.  it is suggested that this legislation threat is undoubtedly a ploy to reenter a negotiation for reinstating caps on damages in a “trade off” for the legislature’s pursuit of complete obliteration of medical negligence-malpractice injury litigation.  Stay tuned!

We all often face releases or waivers of liability in our daily lives, whether as patrons of professional sporting events, participants in extreme sports, such as bungee jumping and skydiving, or any number of other activities.  Frequently, we are required to sign a document before we are able to attend or participate in an event.  Be sure to READ THE FINE PRINT before signing a waiver or release to verify that you are not excusing another party’s own negligence (carelessness) in the event you are injured.  The law in Missouri refers to these phrases or clauses in contracts which release another party from future negligence as exculpatory clauses.  If written correctly, and signed by you, this clause will exonerate the other party from their future negligence that causes you injury.

In Missouri, such clauses are disfavored.  Therefore, the clause must be clearly and explicitly stated such that “there is no doubt that a reasonable person agreeing to an exculpatory clause actually understands what future claims he or she is waiving.” See Abbot v. Epic Landscape Productions a case from the Western District of Missouri Court of Appeals handed down in 2011.  As a tip, if the word “negligence” is used in a waiver or release, that is a red flag to you that you likely should not be signing the document.  In a recent decision from the Eastern District of Missouri Court of Appeals, a young snowboarder who was injured on the premises was denied his claim against the owner of the premises due to his signing of a waiver and release containing an exculpatory clause.  See Guthrie v. Hidden Valley Golf and Ski, Inc., et al.

Although difficult to avoid the consequences of signing an exculpatory clause, you should seek legal representation to review your case given the strong public policy in Missouri in your favor.

Generally, a parent will not be held liable for the torts committed by their child.  However, there are exceptions to the general rule.  First, where the relationship of master and servant exists and the child is acting within the scope of his authority accorded by the parent.  Second, where the parent is negligent in entrusting to the child an instrument which, because of its nature, use and purpose, is so dangerous as to constitute, in the hands of the child, an unreasonable risk to others.  Third, where the parent is negligent in entrusting to the child an instrumentality which, though not necessarily a dangerous thing of itself, is likely to put to a dangerous use because of the known propensities of the child.  Fourth, where the parent’s negligence consists entirely of his failure to reasonably restrain the child from vicious conduct imperiling others when the parent has knowledge of the child’s propensity toward such conduct.  Lastly, where the parent participates in the child’s tortious act by consenting to it or by ratifying it later and accepting the consequences.  Should any exception apply, the long held concept of vicarious liability will kick in and the parent can be held responsible for the acts of his/her child.  For a recent discussion on the concept of vicarious liability in the parent-child relationship see the Eastern District Court of Appeals decision in Meier, et al. v. Schrock, et al. handed down on May 7, 2013.

Currently there is the ever increasing use of “arbitration” clauses in landlord leases, medical and hospital records, and contracts of various types.

An “arbitration” clause is one that provides that if the entity with whom you are dealing (landlord, hospital, doctor, etc.) becomes negligent and causes you a harm or injury to your person or property, that by the force of this clause you thereby agree that you will give up or waive your legal rights to pursue a case in court by a lawsuit, waive your right to a trial by jury, and that you would have agreed to submit your injury claim to an arbitrator.

The caution is, when entering any agreement, to read it carefully and “look before you leap” to make sure that by signing the document you would consciously and knowingly be giving up a recovery right that the law otherwise provides and thereby sacrificing the right that we all have as Americans—the all important right  to a trial by jury.

Health insurance companies have had free reign when it comes to recovering medical payments paid on behalf of their insureds that have been injured by the negligence of a third party.  These companies have successfully carved a niche of unchallenged subrogation reimbursement against their insureds under the auspices of ERISA.  These companies have argued that Congress, through its enactment of ERISA in 1974, considered and endorsed subrogation in the context of health insurance.  Ironically, when Congress passed ERISA, subrogation by a health insurer was non-existent.  Although it was enacted in 1974, it was not until the 1980’s that health insurers began to seek subrogation on personal injury claims.
Recently, the United States Court of Appeals for the Third Circuit has come down with a holding that may begin to level the playing field and require health insurance companies to think twice before they proclaim their unobstructed right to reap the benefit of their insureds’ injuries.  In US Airways, Inc. v. McCutchen, 663 F.3d 671 (3rd Cir. Nov. 2011), James McCutchen was seriously injured in an automobile crash.  His health insurance benefit plan through US Airways paid $66,866 for his medical expenses.  After James recovered $110,000 from third parties, US Airways stepped in and demanded reimbursement of the entire $66,866.  James’ net recovery was less than $66,000.  The Third Circuit concluded that full reimbursement to US Airways, Inc. was inappropriate and inequitable.  The Court further found that full reimbursement would amount to a windfall for US Airways, Inc.  This judgment was appealed and the United States Supreme Court granted certiorari on June 25, 2012.
Time will only tell if our courts will help level the playing field.  In the meantime, it is our job as advocates for the seriously injured to take a stand against the second victimization of our clients by their own health insurance companies.
For more discussion on this topic see “The Revictimization of Personal Injury Victims by ERISA Subrogation Claims” by Roger M. Baron and Anthony P. Lamb. http://fightsubro.com/wp-content/uploads/2012/03/RogerBaron-Revictimization-article2.pdf .